Plasma spray coating: The process and its applications

Plasma coating is a process which involves spraying a substrate with either a molten or semi-molten material. This process creates a hard coating, offering protection against corrosion, wear and oxidation caused by operating or environmental conditions. 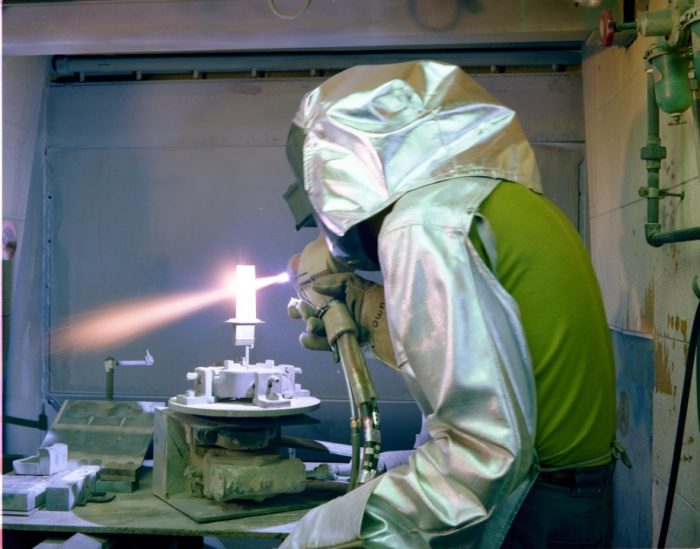 Plasma spray coatings are applied in a very high temperature process, involving the injection of the powdered coating material in the plasma flame. The temperature of the plasma flame can be anything between 10,000 and 15,000 degrees celsius. Once the powder is injected into the plasma, it is heated rapidly and accelerated toward the substrate.

As the super-heated powder reaches the surface of the substrate it cools quickly, creating a hard protective coating. Owing to the high temperatures employed in the plasma spray process, materials with a very high melting point such as ceramics can be used to coat the substrates.

Use of plasma coatings to protect components is common in a range of industries, such as medical, aerospace, electronics, marine, automotive, petrochemical and mechanical engineering.

Plasma coating is often used in applications such as the protection of aircraft turbine engines and land-based turbines, as well as any other areas where greater operating efficiencies can be achieved while offering protection against extremes in temperature.

When looking at the chemical industry, plasma coatings are often employed on parts which need protection against chemical corrosion, erosion, cavitation and abrasive wear.

Owing to the properties of the materials used to coat components, along with the high temperatures involved and rapid acceleration of the spray, plasma coating is a great way to create a long lasting and protective outer layer on all manner of parts. The thickness of the coating can be set to fine tolerances.

Generally speaking, plasma coatings are applied by using spray guns featuring copper anodes which are water cooled as well as tungsten cathodes. This allows the plasma gas to flow around the cathode, then through the anode. The high voltage involved initiates an arc, creating the extreme high temperatures needed to melt the coating. This then forms the plasma, created when the plasma flame is mixed with the powder. All of this produces the trademark hard coating, which adheres strongly to the surface of the substrate.

In addition to the use of ceramics, other materials can be used to plasma coat. These materials are often chosen for their protective and aesthetic qualities. Other common plasma coating materials include aluminium oxide, chrome oxide and zirconium oxide.